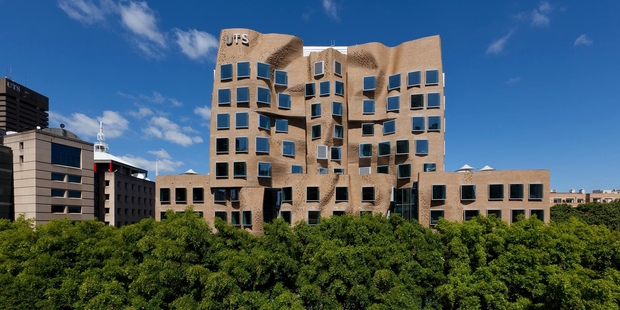 Architect Frank Gehry says he'll never again design a building quite like the "crumpled paper bag" which officially opened at Sydney's University of Technology yesterday. The Dr Chau Chak Wing building, which will house a new business school in the inner-city campus, is being hailed as a masterpiece rivalling the Sydney Opera House in distinctiveness. Gehry, the 85-year-old Canadian/American architect best known for the Guggenheim Museum in Bilbao and the Walt Disney Concert Hall in Los Angeles, said his first Australian work was unique. "I won't do this building anywhere else," he said.

Constructed from more than 320,000 hand-placed bricks and glass slabs, the A$180 million building with its curvy facade obliterates all the usual "sandstone university" conventions. Traditional lecture halls have been replaced with undulating walls, circular classrooms and a grand chrome-silver staircase. "It's the idea that you can humanise a building," Gehry said. He took his inspiration from Sydney's colonial sandstone buildings, and chose to work in amber-coloured brick as a tribute to that culture. "The 19th-century buildings in Sydney are the most accessible. They have a humanity while the modern buildings tend to be cold and off-putting," Gehry said.

It got the thumbs-up from Governor-General Peter Cosgrove, who called it "the most beautiful squashed brown paper bag I've ever seen". "It's bold. It's inspiring. The walls invite you, the glass embraces you," Cosgrove said at the opening ceremony. The building is named after Chinese businessman Dr Chau Chak Wing, who donated A$20 million to the project. His son had previously studied architecture at UTS, which has undertaken a A$1.2 billion campus upgrade over the past decade.

The Gehry building is the centrepiece of that plan.

Previous Next
I have known Fouad El Chikhani for approximately 5 years, during which time I have come to respect his considerable ability as a construction programmer. He has had extensive work experience in this area in the United States and New

Our experience and knowledge of national and international claims and disputes is second to none. Our proven experience and extensive training keeps us ahead of the competition. We also believe that a company is only as good as its staff. All of our personnel are industry leaders in their chosen field. Read more